Our GPH Services building on Charlevoix at Wayburn has in interesting history. It was built in 1923 and opened as the Grosse Pointe Park Theatre. The building was designed by Building Service Bureau with Ernest C. Thulin as architect.

Grosse Pointe Architecture, a Facebook group that chronicles historic homes and buildings in the Grosse Pointes, has many posts that mention this architect for local homes.

Thulin is also credited with designing the Lakewood Theater and Admiral Theater (originally Harmony Theater) in Detroit. The Detroit Theater Organ Society reports there was a Marr & Colton theater organ installed in the building. 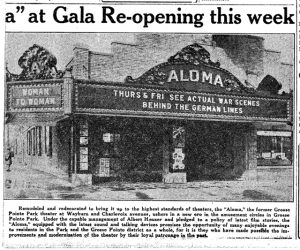 By 1930, the building was renovated as a movie theater and renamed the Aloma. Photo credit: cinematreasures.org.

The caption in the photo states that the Aloma is “…equipped with the latest sound and talking devices [and] promises the opportunity of many enjoyable evenings…”.

The Aloma operated as a movie house until 1955, when it was renovated to become an indoor ice skating venue named “Ice Flair.” 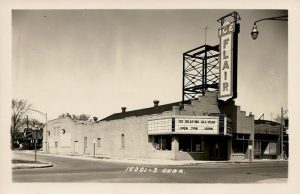 A Grosse Pointe News article from June 23, 1955 states that the summer season of the Ice Flair will open “with ceremonies on July 1 at 1 o’clock. Ted Forest, dance instructor at the Little Club, will be in charge of all activities for the summer season.”

Our renovations have revealed ornate plaster work that had long been hidden behind a drop ceiling. There is also much work to be done repairing old damage caused by the prior removal of a load-bearing wall.

GPH Services is seeking information about the building and its occupants over the years. If you have information, please email or call 313-757-1969.

When Aaron Whittaker purchased the building at the corner of Charlevoix and Wayburn just more than three years ago, he had no idea it had such a varied past.

The owner of GPH Services, a remodeling and renovation company, began to research the property and learned about its “beautiful” history. Read more…